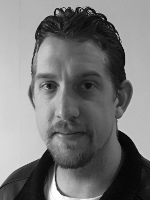 Ben has a background in systems development and design, and specialises in IT support, application and game development. He brings unique experience to the team with his passion for programming and has been in the games industry for over 10 years, with 6 years in AAA Game Development.

Ben has a range of IT qualifications in systems analysis and design, software development, multimedia and training. He also has extensive experience in managing IT projects, business innovation and improvement. Ben has worked as a programmer on several globally recognised games and is highly respected within his industry. He has a passion for innovation and developing skills in others.

Ben has over 10 years of experience in games development, having shipped games on most of the major game development platforms. Ben has worked on both top end AAA projects with budgets in excess of 100 million dollars as well as small budget independent games. He works closely with the end user and is dedicated to delivering quality outcomes in every project he undertakes.